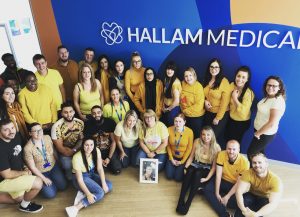 The team at Hallam HQ left their work clothes at home and wore yellow to raise money for a charity very close to our hearts.

Our team raised a total of £307 for Imogen’s Dream by wearing anything yellow they could find, the brighter the better, playing various games throughout the working day and enjoying a special celebration lunch together.

We wanted to support Imogen’s Dream to mark one year since our HR and Office Manager, Julie Ellis and her husband Richard lost their stepdaughter/daughter Imogen to Ewings Sarcoma. Imogen was diagnosed with this rare aggressive form of bone cancer in 2016 but lost her battle with this aggressive disease in October 2018.

Although this was a difficult time for both Imogen and her family she was able to enjoy some unbelievable experiences which gave her something to look forward to and her family some amazing memories to be able to cherish for the rest of their lives. Imogen set up Imogen’s Dream charity so she could help and support other young people battling cancer, and give them the opportunity to escape the reality of this awful disease and give them the chance to make memories that their families can look back on and smile.