Remembering and honouring our Heroes

As we take a minute’s silence to remember those who have served and continue to serve to defend our freedom and way of life, it is important to recognise the vital role Nurses played during times of war.

Nursing within the military can be dated back as far as the Crimean War. Florence Nightingale was recruited by the Secretary of State for War, Sidney Herbert, to lead the women in tending the wounds of the injured soldiers. He said there was a need for a nursing service because soldiers had little medical care and treatment and were dying from neglect as well as their horrific wounds.

During World War One Nursing was deemed exhausting and often dangerous work. The women who volunteered for this work often experienced the horrors of war first-hand and many lost their lives carrying out this important work.

Today Military Nurses and Medics continue to play a key role within the armed forces, working alongside military personnel in war zones and at home. As well as treating common medical conditions they also treat severe life-threatening injuries, such as gunshot wounds or lost limbs.

Thank you to all our Military Nurses both past and present who have worked hard to keep our soldiers safe and well.

We will remember them. 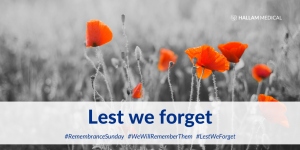